The Other Trial Winding Down Today

Lots of attention on the Prop 8 Trial today, which is winding down today.

Another trial I've been following with rapt (obsessive?) attention is the conspiracy/obstruction of justice trial of the three men who are alleged to have tampered with evidence after Robert Wone was murdered in their home.

If you're unfamiliar with the case, the basics are that Robert Wone, a straight lawyer, worked late one night and crashed at his college buddy's Joe Price's house on Swann Street. Joe shared his house with domestic partner Victor Zaborsky and Dylan Ward (who was having a S/M sexual relationship with Price). Robert is murdered. Police never charged anyone for the murder, but claim the trio (or "trouple" as they are called by the Who Murdered Robert Wone community) tampered with the crime scene (the knife found there does not match the wounds, there was little blood present and it appeared someone had wiped the knife of blood as well as cleaned Robert's body).

Add the fact that there was no signs of forced entry (the trouple advance the theory that an intruder did the deed) and that the autopsy found no signs that Robert struggled or reacted defensively when stabbed, had several needle marks on his body from injections occurring before death and that he had been sexually assaulted (his own semen was found in , among other places, his rectum), this is one interesting case.

And it only gets more bizarre from there.

At any rate, prosecution rests today and the judge will consider motions by defense for acquittal, which many expect Ward, if not all three, have a decent shot of getting.

You can read all about it at the Web site Who Murdered Robert Wone. There is going to be a movie about this one day, trust me.
Posted by Scott at Wednesday, June 16, 2010 No comments: Links to this post

Park as I Say, Not as I Park 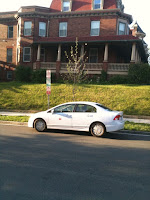 The car driven by a DC parking officer (what are they called nowadays) can usually be found most mornings illegally parked on the corner of 13th and Fairmont (the picture at left was taken around 6:45 a.m.). I assume the officer lives in the neighborhood and yes, street parking is tough.


Unless you're a privileged taxpayer-paid DC employee. How proud I am as a taxpayer to see this official taxpayer paid-for vehicle emblazoned with the DC flag gleefully violating DC traffic law making it easier for the DC officer who drives the car to write more tickets on DC citizens (like the ticketed car in the last picture that is parked exactly as the officer is, a block away on Euclid and 13th).

The license plate number on the officer's car is DC 9229. 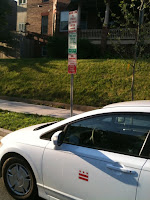 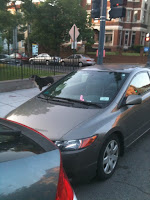 As if it weren't bad enough that I turned 46 this weekend (the 30th, if you want to mark it on your calendar so you can remember next year), I stumbled upon a facebook page for my high school graduating class to find that 10 members of my class have died. One I knew about. The rest were a shock.

Okay, so maybe turning 46 isn't so bad after all.

Email ThisBlogThis!Share to TwitterShare to FacebookShare to Pinterest
Labels: 46, FCHS 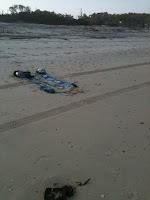 Not only run over, but dragged off to boot.
Posted by Scott at Tuesday, June 01, 2010 2 comments: Links to this post

Scott
I'm an Introvert and I vote. 48 year-old trying to figure it all out. Recently ended 24 year relationship, father of a 7 year old wanna be Ninja and construction worker. Introspected and introverted. Usually serious, sometimes silly. Communications consultant. Very opinionated but seldom smart. Seeking insight and laughter in 2012.

100 Stupid Things About Me